Fall is in the air, and soon Halloween will be here. I thought I might share some of my Barbie Halloween dioramas with all of you this month. Halloween is such a fun time of year. You can dress up as any favorite character and it's perfectly okay. It can be scary, cute, or weird, of just plain original fun. I also like to have some Halloween fun with my dolls. 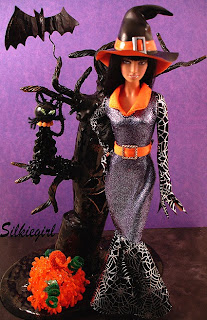 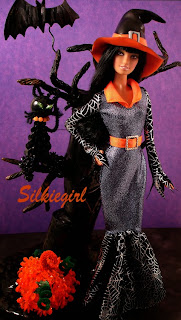 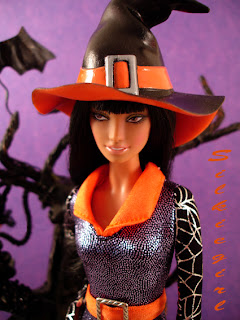 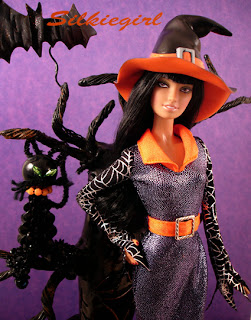 Top Model Teresa certainly makes a lovely Halloween witch. Who said witches had to be ugly old hags with warts and hairy moles? lol Certainly not me, and all of my girls that I'll share this month will be anything but beautiful. However, don't for one second doubt their powerful abilities as witches, or you might just end up turned into a big old ugly toad. (cackle)

In case your are curious, bhe black cat and pumpkin are made from beads and wire and pipe cleaners. Everything came in a kit, and I put them together. It was a fun little project.

Please stay tuned for some more Halloween posts as I share some of the fun Halloween Barbie dioramas.

Thanks for stopping by, and I hope you come back. I love comments, so please leave one for me.

Fall is just around the corner now, so I thought I would share a doll in my collection that....to me....reflects this Autumn season very well. Je Ne Sais Quoi Silkstone Barbie is one of my favorite dolls in my collection. She is so elegant in her beautiful fashion ensemble, and I'm sure her share of heads are turned wherever she goes. 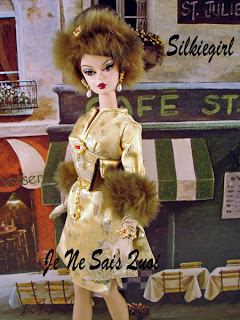 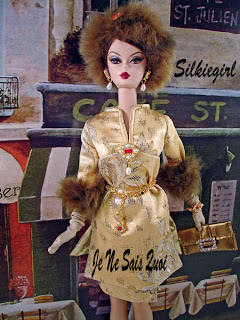 Isn't she stunning in her very couture fashion? Here you see her leaving this quaint little cafe.....let's say in Paris. lol 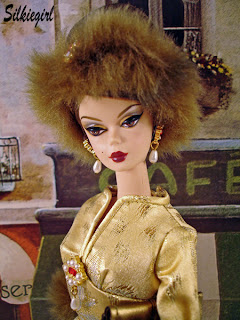 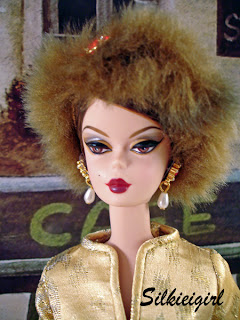 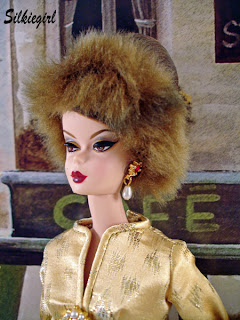 Her makeup is flawless and really makes the most of her beautiful face. I think she is perfection all wrapped up in one silkstone doll. I hope you agree.

I so appreciate you stopping by my blog. Please leave me a comment, as they are always welcome.

A Dollie Gift from a Dear Friend

Recently I was surprised and very blessed to receive a package in the mail from a dear online friend. To say that I was happy when I saw what was inside the package is an understatement. I might have squealed. lol I'm sharing my gift here today in this post. Please meet Zombilina. 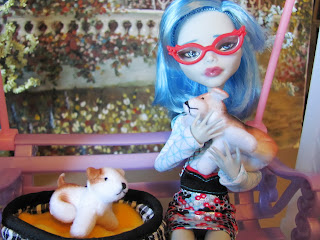 Zombilina doesn't really need to wear glasses, but she loves these
red cat eye glasses with a 50's vibe. She loves what a fashion statement they make. 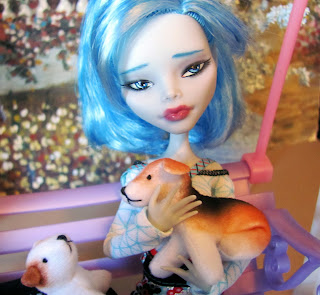 Here Zombilina is not wearing her glasses so you can see what a cute repaint she is. I just love her. 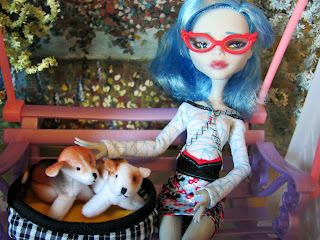 Her love of dogs is well known among all of her peers at Monster High high school. She has 2 really cute small dogs that she takes practically everywhere with her. Today they are enjoying a wonderful day outside sitting on the patio swing enjoying the sunshine and all of the pretty flowers.

I hope you enjoyed my post today. Thanks for stopping by.

Gal On The Go Silkstone Barbie

Gal on the Go has a look that is very 50's with her lined cat eye eyes, big red Lucy lips, and the bubble-cut hairstyle that was very popular during that decade. Her fashion is very typical and fashionable as well. I think the 50's is one of my top favorite time periods for fashion and the whole glamorous look that so many women wore. During that time period, women went out dressed to the nines wearing hats, jewelry, gloves, heels, stockings, and a the latest dress, suit, etc. The undergarments were just as important to the whole look as all of the outer garments. Today we have spanks, and then we had girdles. 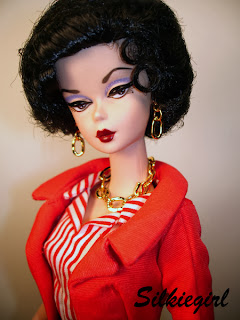 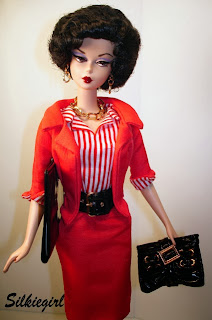 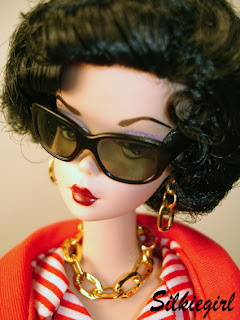 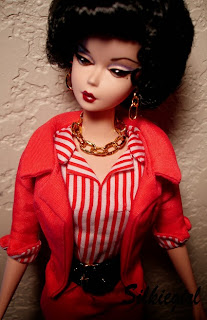 It wasn't popular for married women to work outside the home in the 50's , but some women did anyway. I'm thinking Gal on the Go could have been anything during that decade from a secretary to a very glam movie star. Some women were true pioneers that paved the way for every woman from that decade to present time. To me, Gal on the Go represents one of those very forward thinking women, and I'm thrilled to own her so I can share her with you all today.

I hope you enjoyed this post and so appreciate you stopping by to visit.

I know it's summer and hot in so many parts of the world including here in the USA, and Christmas is still some months away, but I just had to share this gorgeous doll. This year marks the 25th anniversary for the Holiday Barbie, and Kmart has their own exclusive doll. This is not the first year they've had their own exclusive Holiday Barbie, but this girl is special because she marks a milestone in our beloved doll's history. So...here she is, and I hope you love her as much as I do. 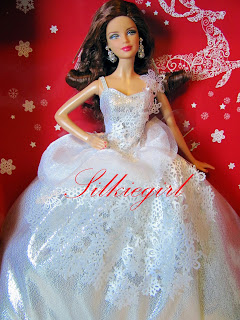 In case you are wondering, she is still in her pretty box. I leave all of my Holiday Barbies in the box when I buy them, so I can protect them from dust. I just took her out of the outside box so I could take pictures without that awful glare. It's a bit hard to tell from the picture, but her hair is a pretty reddish brown color. Her gown is so snowy and wintery with snowflakes all over it in white. I think she is perfection with her pretty makeup and shiny soft reddish brown hair.

As always, I'm sharing a closeup of her gorgeous face. I hope that you all get a chance to find her and see her in person. My pictures really don't do her justice, but I gave it a good try. 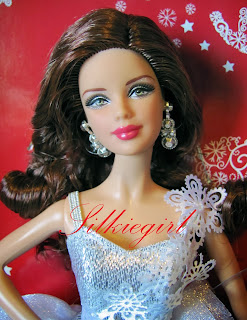 Thanks so much for stopping by my little blog and visiting. I hope you enjoyed this post. Until next time....keep on dollie collecting and playing.

In 2008, Mattel gave us a line of Celebrate Disco Barbie dolls. Although I liked them all, I only bought one of them. Nikki became part of my collection, and I love her. She has the Steffie face mold, which is adored and sought after by many Barbie doll collectors. Here are some pics of her that I have taken at different times. In the below pictures, Nikki is ready to "dance dance dance." 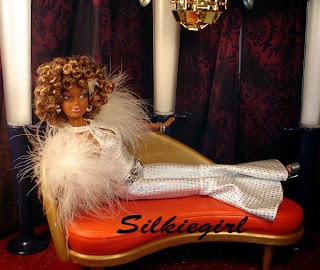 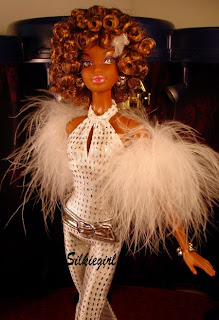 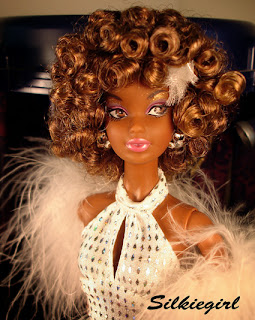 The next pictures show Nikki all dressed up and ready for a dinner date with her beau at a fancy restaurant. This girl can wear anything and look stunning. 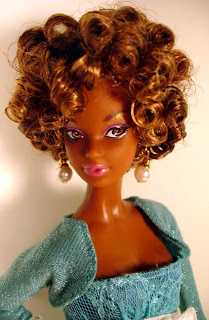 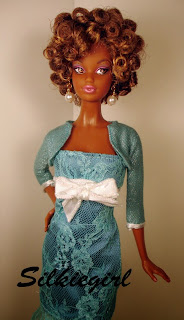 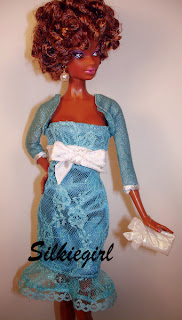 Isn't she adorable? I just love everything about her. Although I took these photos from the archives when I was using my old camera, she still looks stunning.

Today I thought I would share a bit of Barbie whimsy with all of you. This is a picture I took some time ago as a bit of a joke that I shared with a Barbie group that no longer exists. boo hoo Anyway, everyone who collects Barbie knows that Ken...Barbie's long time boyfriend....has been the brunt of a few jokes over the years. I won't say what jokes....but I'm sure you all know what I mean. lol Poor Ken. He does still remain Barbie's boyfriend...even after a short breakup that did not last all the long. I guess it's true love.

So...I decided that some of my grandson's action figures could be contending suitors for my Barbie dolls. One of my favorites is Max Steel. Maybe some of you know him from the kid's animated TV show? Is he still on the air? Not sure. 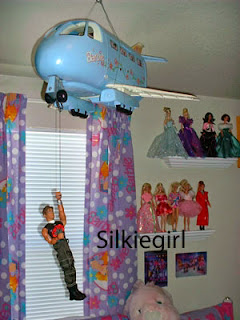 Here is Max Steel trying to rescue Barbie and all of her passengers in her Barbie plane. Seems she is having some sort of mechanical problems, and Max knows just what to do. ha ha

Also you can see part of my Barbie room in this picture, but it looks a bit different now than it did when I took this picture. The large pink Barbie bunny was given to a little girl my granddaughter was babysitting, and the bed was sold. I had to make room for more dolls don't ya know. lol Kind of wish I still had the bed.....but life goes on. Plus....a lot more dolls now reside where that bed used to be.

I hope you enjoyed this post today. Oh...by the way....the Barbie plane is still there, but Max Steel had to go on another rescue mission in some other part of the world.

Chrissy
Okay....I won't bore you with telling all of you out there in dollie and crafting land that I am a wife, mother, and grandmother. Oh wait....I just did. haha However, I do feel that I am more than these three things, but these three things have helped to make me who I am today. I have lots of interests, but my main interests are collecting Barbie, scrapbooking, sewing, and so much more. Here I will share some of my interests, so I hope you like what I share here.